Yume Hasegawa (長谷川 夢 Hasegawa Yume) is a sweet and well-mannered girl who lives with her older brother Utsutsu. When she is infected with the Pupa virus Yume becomes a violent monster who feast on humans or any living thing, even her own brother.

Yume's human form has brown eyes and short brown hair that is a little above her shoulders. Part of her brown hair on the left is pinned back by a pink hair-pin. Yume is mostly seen wearing her school uniform. She wears a green sweater over a white collared shirt with a red bowtie, along with a short blue skirt.

She is sweet and well-mannered. When she is first infected with the Pupa virus she turns into a violent red-winged monster, unless she can calm herself down by eating her brother's flesh, mainly because of the virus's side-effects. The manga shows that because she was originally a monster, she lacked common sense, but became more and more human after interacting with Utsutsu, who was the only one who showed her affection.

Yume had a rough childhood when growing up, along with her brother. Their father would constantly abuse them along with their mother. As her father would hit her brother he would say, "This is your reality". Yume was and still is protected by her older brother, Utsutsu. Yume's father and mother divorced after some time, and her mother would 'play around' with a younger man. As all this happened, Yume would cry as both her brother and her were then left behind to live alone together.

One day at school, Yume comes across strange red butterflies, and transforms into a monster who proceeds to attack and devour Utsutsu. He is shown to be fine, but gains the ability to heal his wounds and regenerate lost limbs. Thus, he acts as a living food source to satisfy his sister's hunger for flesh after she was infected by the virus. They decide to escape from home, but they get kidnapped by a group whose leader is a rather mysterious woman named Maria, who wants to dissect them in order to learn about the virus.

Utsutsu and Yume are sent to a laboratory and Utsutsu is dissected alive. This makes Yume upset enough to transform into a monster and attack everyone there. However, she rapidly becomes stuck in her monster form. Suddenly, a mysterious man named Yuu helps them escape from the laboratory. Hiding at a forest, Yuu reveals himself to be some sort of ancient larva that can transform into anything it touches and is currently seeking for his lost mate.

It is later revealed that Yume is actually one of two ancient immortal monsters (the other being Yuu) that had the bad luck to be found in larvae form by Maria, then kept being experimented on for 30 years. The female monster escaped the laboratory and entered Sachiko Hasegawa's uterus. The monster had the ability to mimic, so once inside of Sachiko, she had copied everything about her host-mother. Thus, resulting in Yume having the exact same DNA as Sachiko. When she was born as a human baby, she lost all of her memories of being a monster. When the red butterflies were released in the park at the beginning, this suddenly triggered the monster inside of Yume, not transformed her as Utsutsu believed.

As a toddler, Yume acted very strange, due to lacking common sense and not knowing much about human behaviour, such as smiling creepily at Sachiko, hurting Utsutsu for no reason and eating bugs... Sachiko could not take it anymore (since Utsutsu refused to see that something was wrong with Yume) and promptly abandoned the household. When Utsutsu demanded to know why their mother abandoned them, Shiro lied to him, by saying that she was seeing another man. Yume was also the one who gave Utsutsu the scar across his eye, but he is in denial about it and insists that his father did it.

Yuu also tells Utsutsu that Yume is his lost mate who was separated from him years ago. However, Yume doesn't remember him, so Yuu decides to make her remember with his powers. Unfortunately, this makes Yume transform into a monster and cause a rampage, until she's pacified by Utsutsu. This makes Yuu realize that Yume loves Utsutsu now and comes to terms with it.

The "Dearest You" extra-story reveals that Yume did regain her memories after Yuu's attempt. She apologizes for leaving him behind at the lab all those years. Yuu accepts her apology and warns her than an eclipse will come soon and they need to "emerge" and leave their Pupa forms. However, Yume refuses, since she doesn't want to leave Utsutsu behind. Yuu says goodbye to Yume, since he had been killed and assimilated by Maria and the Pupa Larvae.

Maria appears, being impregnated with the appears, being impregnated with a Pupa Larvae created from Utsutsu and Yume's dna and turning into a fleshy blob that rapidly covers the whole forest. She kidnaps Yume in an attempt to assimilate with her. Before being swallowed up by Maria, Yume tells Shiro (who had come to the island to take Utsutsu with him) to protect Utsutsu in her stead. However, Shiro and Utsutsu are assimilated too. Father and son reunite inside Maria, but shortly afterwards Utsutsu is transported to the bottom of Maria-Yume's monster form. He's later saved by the Pupa Larvae, realizing that Utsutsu is his biological father. However, as soon as he's outside, Utsutsu mutates into a monster. He starts attacking Maria-assimilated monster form, but is surprised to see that she mutates into several clones of Yume. In order to separate Yume from Maria, Utsutsu starts devouring the Yume clones.

It's revealed that Utsutsu didn't mutate into a monster, because he was already one. After Sachiko abandoned them as children, Utsutsu became very depressed and lonely. Yume decided to leave Utsutsu and the household in order to search for Yuu by herself (not realizing that he never managed to escape the hospital). However, she didn't see an incoming truck on the way. Utsutsu, who was searching for her, protected her with his body, but ends up getting himself killed instead.

As it turns out, Yume didn't need protection because she could easily regenerate from her injuries. With the last of his strength, Utsutsu tearfully begged Yume not to leave him alone like his mother did. Yume promises to be with him forever and revives him as a monster by feeding him some of her flesh. This made Utsutsu imprinted to Yume and her memories of Yuu were sealed. The red butterflies never infected them with the Pupa virus, it merely awakened their monster instincts. Suddenly remembering this makes Utsutsu return to his senses.

It's also shown that despite lacking common sense at first, Yume started acting more human after interacting with Utsutsu and seeing his unconditional love for her. She also regained her memories as a monster after seeing the red butterflies, but decided to keep her human form for Utsutsu's sake.

After finding out the truth about himself, Utsutsu responds that despite being revived as a monster and his attraction to Yume being imprinted, that doesn't make his own feelings for Yume any less real. The eclipse comes and Utsutsu remembers Yuu's warning that Yume needs to "emerge" but she needs a partner to do so. Accepting their fate, they proceed to devour each other as they happily embrace for one last time and both melt into a cloud of red butterflies, completing their emerging. Only their hairpins remain as their voices resound in the distance, declaring their familial love for each other.

Because the anime was short, it only covers the first part of the manga, when Yume sees the red butterflies and it triggers her transformation into a monster. She becomes infected with a virus known as Pupa. This virus mutates organisms into insatiable monsters, only seeking to feed on any sort of life.

Yume succumbs to the full effects of the Pupa virus, but reverts into a human. In order for the virus to be suppressed in Yume, Utsutsu must take a drug and have Yume feed on his flesh. At the end of the anime, it's revealed that she was never infected, but was a monster all along. She never meets Yuu or recovers her memories. 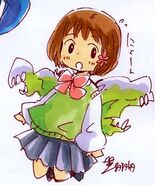 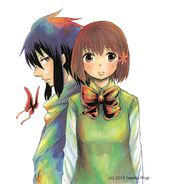 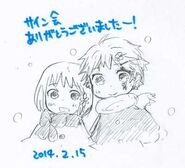 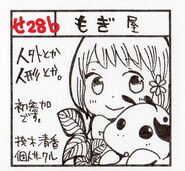 Young versions of the Hasegawa and the Imari siblings.
Add a photo to this gallery
Retrieved from "https://pupa.fandom.com/wiki/Yume_Hasegawa?oldid=5149"
Community content is available under CC-BY-SA unless otherwise noted.